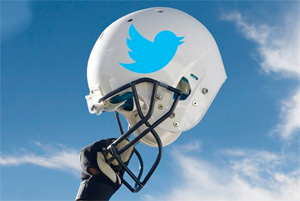 We see it everyday. An athlete will put their “foot in their mouth” and not even realize it until they press send. By then, it’s too late and has already gone viral (within seconds). As long as it takes to build up a positive reputation, you can destroy it with one tweet. If you have to think twice about sending a tweet, it probably shouldn’t be sent in the first place…

As NFL teams have people in charge of their social media accounts, they need experts overseeing each and every player on the team to make sure inappropriate things aren’t being said and when it does, cleaning up messes quickly. Although fans worship athletes, those same athletes are still employees who work for a professional franchise. When NFL teams employ a player, they are representing the entire organization, on and off the field. Those “fans” and “followers” of that athlete are just like potential customers of a normal business who buy tickets, jerseys, merchandise, concessions and every thing else.

If athletes spent more time interacting with people who praise them and not worrying about the “haters” creating “twitter wars”, it’s a fact they would sell more jerseys and merchandise. It just takes someone to sit down with them and explain all the ins and outs.

A message to NFL players: “You already made it to the NFL. There is no need to brag. We don’t need to see photos of you on Twitter with stacks of hundreds that you won in Vegas, photos of you with all your diamonds or with strippers at dance clubs. That only lets people know where you are, carrying around money and you have now become a prime target for a robbery.”

Here is what I compare it to: When a crazy fan runs across the field in the middle of a game to get attention and live TV doesn’t air it. Obviously, the guy is trying to get attention and exposure. That’s the same on Twitter. Why should an athlete even give a “hater” the attention on Twitter when that’s what they want. Give them the silent treatment, while paying extra attention to the real fans.

Your Twitter timeline and Facebook wall should be treated as a press conference, with back and forth interaction. Players should act responsibly online, as they would in a press conference. It’s the same concept, except online and reaching a lot more people, faster than ever could imagine. Social media outlets like Twitter, Facebook and Instagram are how fans get their real time information these days. People are watching less TV, reading less newspapers and believe everything they read on the Internet, although it may not be true. Perception is Reality!

I am a strong believer of our freedom of speech rights, but in my opinion, every NFL team should have a social media expert (or two or three) assigned to every player’s account. It makes me cringe when I see a bad tweet that could easily be avoided causing damage to the athlete’s reputation. When they sign an NFL contract, a clause about social media should be included as long as they are employed by that organization. They should also have experts come in on a regular basis teaching the proper way to tag, hashtag, retweet, etc. I could go on and on. Not only for increasing revenue, but for the reputation of the team and athlete.

Maybe the NFL should just have me come in and teach a lesson or two to get these guys on the right track! Email me, Ryan@AthletePromotions.com….or tweet me @RyanTotka.